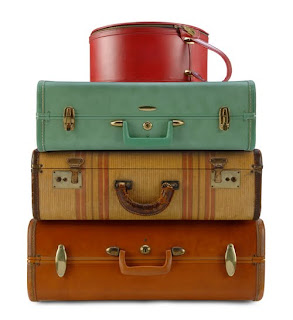 I don't really like packing. Inevitably I bring either too much or too little. Shoes never pack well, have you noticed? Emptying large pots of cream into tiny travel containers is a bore. Right now I should be packing for an upcoming trip to London and Sweden, but I've been avoiding it.

Now I have a perfect excuse to avoid my empty suitcase waiting by the door. My dear friend Jeffry Haggett is in town and he's asked me "So, what's new in Calgary?"

Jeff hasn't lived here for years so by "new" he's referring to the last decade or so. Being the hip urban designer/city planner/world traveler that he is, I know he won't be interested in any of the new edge suburbs or peripheral freeway overpasses. He wants to know what's new in the city.

I contemplate Calgary as of June 2011. This is so good for me! I love to think about it from a visitor's perspective. It forces me to stop taking it for granted. How would an outsider perceive this place? I should note here that Jeffry has lived everywhere from Halifax to Fort McMurray and traveled extensively all over the world. As a progressive independent thinking city planner, he has honed a discerning eye for all things urban. This can't be your average city tour.

I know just where to begin.

Not deterred by the drizzling rain and cool temperatures, we wander onto the spanking new river pathway of the yet-to-be-built East Village. A city planner's dream - nothing but wide open potential here – Like a stage set waiting for the actors to arrive (not to mention some additional sets). Standing on the carefully honed stone steps, we imagine what might take place on the expanse of open plaza beside the red brick Simmons Mattress building. An Arts festival perhaps? An organic food market serving mouth-watering sandwiches on french baguette? Sunbathers fretting about their tan lines? (ok that might be a stretch today). It's all there just waiting for something to happen.

While Jeff and I dream up how to fill in this perfect site, we head out to our next stop – Inglewood. I have fallen in love with Inglewood all over again. I had started taking the charming local businesses and authentic heritage buildings along 9th Avenue for granted. That is until recently. A few weeks ago, while devouring a perfect thin-crust margarita pizza at Without Papers (located in the Befus Block, above SUGOs) I was reminded of the great vibe here.

Had to see if Jeff would agree.

We begin at The Befus Block building, specifically outside the window of blue hydrangea floral boutique. You can't walk by this place without stopping dead in your tracks. There are always the most perfect flower arrangements here. Points for making the city just a little bit prettier b h!
A few doors down, we enter the chock-full Bite Groceteria, currently my favourite foodie shop in the city. Now Jeff and I have perused many a grocery store and this one certainly measures up. With its over-sized chandelier and Liberace wallpaper hung behind the espresso counter, Bite teases you inside. Come on, don't you just want a taste of that marzipan cookie? How about a container of vanilla sugar from Israel? Or a cleverly striped Paul Smith water bottle filled with evian? Everything is a temptation. Don't come here hungry. We end our visit with a quick sip of tiny but potent espresso, and on this caffeine high, contemplate our next move.

Here I must stop the tour to make note of how frustrating Calgary's park plus parking system is. Having visited/lived in various cities throughout the world, Jeff could not think of one with a more complicated system. I make a mental note of the four digit street code while Jeff memorized his license plate number and together we attempt to key in what we've placed in our short term memories into the park plus machine. We squint to read the tiny gray screen with way too many numbers and options, hit a few buttons until we assume we're done. This takes full concentration and a team effort. Why we ask? Why? Sure on many occasions I prefer to walk than to drive, and then parking isn't an issue, but we've got an entire city tour to get through. Calgary loses points here - thanks park plus! (update here: I have been told the smart phone version is much, much better)

With a quickly dwindling espresso-buzz, we proceed to our next destination – the Beltline. We start at the newly refreshed Central Memorial Park on 4th Street between 12 and 13th Ave. Its lunchtime so we step into Boxwood for a quick bite and conversation about Calgary's latest updates. We're both impressed with the park's facelift, its human scale and central location (side note: Boxwood's gooey raspberry brownie should win some kind of an award). We take a few photos and cross the street to Shelf Life Books, Calgary's latest independent bookstore conveniently located right beside the park. You may be aware that I took the closing of McNally Robinson Books rather badly (that's an understatement, I was ready to skip town) and maybe hadn't fully recovered from it –until now. Bookstores come close to grocery stores as dispensers of basic necessities as far as I'm concerned and Calgary just doesn't have enough of them (especially downtown). This is such a welcome addition. We sniff out the impressive selection of art and design books in the far back corner, peruse the eclectic staff picks, then depart for our next destination–Holt Renfrew and the Core downtown.

The white, white floors and endless white walls of Holt Renfrew instantly make you feel fresh. Jeff begins to spray the air with 14 different Hermes fragrances. We move on before the smells overpower us. Indeed, this is a place to come to if you want to feel like you are in a city. Its chic and cosmopolitan and loaded with great shoes! It never fails to improve my mood. Up the Holt's escalator and into the new mall known as the Core, a small gasp escapes as we look up at the huge expanse of glass above our heads. Ok, this is an improvement. A great city show-off spot for all your out of town friends!

There's just one last stop to make and that is the neighbourhood of Garrison Woods/Marda Loop district. We do a quick tour around to get a feel for the streets, the perfect width walkways and mixed housing types. Most of our comments are positive with just a few negative thoughts concerning the architecture. Must there be so many styles so close together? Was this because they didn't want it to all look the same even though it was all built at one time? Some of the contrast is a bit jarring, but this aside, another great improvement to our fair city.

We end with a cup of Phil +Sebastian coffee on 33rd Ave (in the building with the shoppers drugmart on the corner). A good city can never have too many well-designed cafes. You may feel slightly naked without your mac book air here, as it attracts a home-office-worker-but-I-need-to-get-out crowd.

The cafe's high ceilings give us lots of room to think about our tour. So how does Calgary rate? Pretty good. In fact, I feel quite proud of the recent urban design accomplishments. Sure I've focused on the positive and ignored our obvious offenses (I just can't talk about sprawl one more time, let's just hope one day we won't have to!) We both agree, there's been some great additions to the city.

Perhaps the best part of this trip was that there was no heavy luggage involved. Which reminds me, I need to go pack... 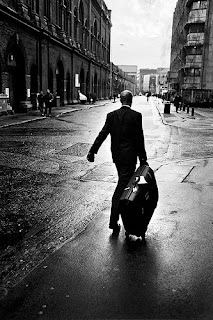