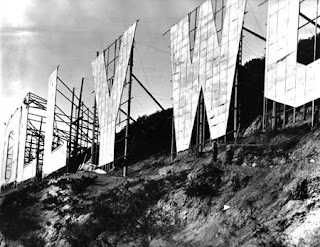 On my recent trip to L.A. I had the opportunity to photograph the HOLLYWOOD sign nestled majestically among the hollywood hills. This landmark has come to symbolize the city and the movie making industry that has made it famous. After a bit of post-travel research I discovered a few interesting tidbits I would like to share.

Erected in 1923 during a massive real estate boom, the sign was intended to be an advertisement for a new upscale Hollywood development called HOLLYWOODLAND. Built for the Los Angeles Times publisher Harry Chandler, the giant billboard was supposed to be up for the time it took to sell off his real estate investment. Needless to say, its lasted a tad bit longer than that. 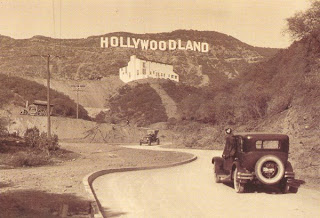 How a propos that this symbol of L.A. was originally designed to sell the suburbs that have now come to symbolize the dominant physical layout of this area. Its always been about real estate.

The sign originally lit up - first 'HOLLY' then 'WOOD' and finally 'LAND' blinked on and off. After the boom, the proverbial bust caused all this glitz to stop. Post-war L.A. real estate lost a bit of its luster, and so 'LAND' was dropped from the billboard and the sign became not an ad for real estate but a symbol of the movie business.

Like the industry it represents, the infamous sign has been in the headlines recently. As in times past, it's in need of some upkeep and so the City of Angels is asking all its stars to divy up some hard cash to help out. Hugh Hefner was there back in 1978 to raise funds to build an entirely new sign and now in 2010 he's stepping up again to help out.

Gazing out at Mount Lee in glorious Griffith Park, I silently thank Hef for his contribution. Now if they could just get it to light up and blink again. 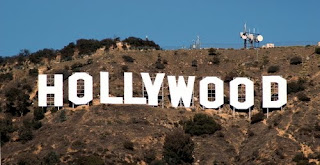 Posted by Maureen Hodgan at 10:43 AM No comments: 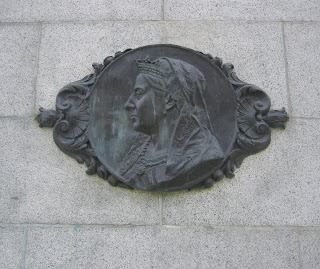 Why not celebrate Victoria day in the oldest inner city park in Calgary?

You can find a gorgeous cameo of Queen Victoria on the side of the base holding the equestrian statue of a soldier who fought in the Boer War. She was prim and proper, just like the park's newly renovated 11 million dollar facelift.

The grand re-opening of the Central Memorial Park was held earlier this month after a two year redevelopment period. Its not exactly the grand old 1912 version with palm trees and grandstand, but it is a lovely contemporary version, complete with Boxwood (soon-to-be-opened outdoor cafe) and free wireless internet.

Located between 12th and 13th Avenues and 2nd and 4th Streets S.W., the inner city park was the place to meet. The British Victorians, and then Edwardians who followed, made hanging out in the garden trendy. Suddenly there was a middle class with more leisure time on their hands. Attracted to the romanticism of country life, time was spent recreating elaborate gardens in the city.

The initial park design by HG Burrows in 1908 was followed by William Iverson's redesign in 1911 corresponding with the opening of the charming Central Memorial Library. In 1913, William Reader became parks superintendent and developed yet another scheme for the flora and fauna. This Victorian grand dame has had alot of 'work' as they say.

As an initiative to breathe new life into Calgary's oldest surviving park, a study was commissioned by the Victoria Crossing Business Revitalization Zone (thanks to the folks at the Beltline Initiative) headed up by the landscape architects Carson-McCulloch Associates. Additions include water fountains, re-aligned pathways and the planting of over 11,000 tulips. 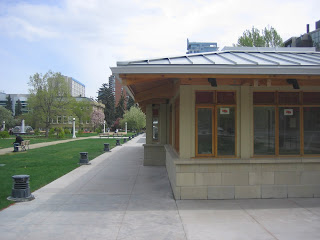 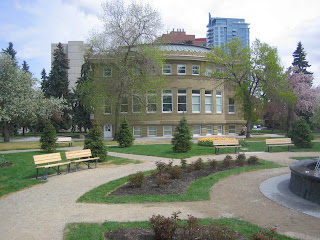 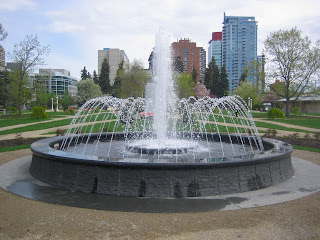 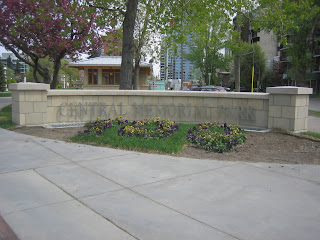 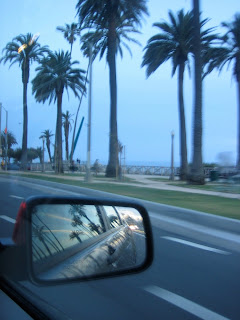 On my recent visit to Los Angeles, I was told that rather than talking about the weather like we Canadians do, Angelenos discuss the route they took to get to their destination. With great pride, they tell their date the ingenious system of roads they took to get to the restaurant in the quickest possible time.

Having driven around the greater Los Angeles metropolitan area for the last week, I can see what he's talking about.

There are more cars in California than people in any of the other states of the U.S.A. With one of the largest high speed road networks, L.A. has the highest per capita car population in the world. The statistic is something like 1.8 cars per person. To call this a land ruled by the car is an understatement.

Ordinarily when I travel to other parts of the world I like to walk around to get a feel for the place. You can do this here, but on a limited basis, say along the beautiful walking/biking path that follows the beach and ocean in Santa Monica, or on a shopping street like Abbot Kinney Blvd or Melrose Avenue. But if you really want to get around, you need to get in a car, and preferably one with a GPS. (I laugh now thinking that we almost turned it down at the car rental agency, thinking it was an unnecessary extra cost! ha!)

There were things I saw here that I've never seen before, like a pedestrian walk/don't walk light to let you know when its safe to cross a six-lane-wide car parkade entrance, or people who got out of their cars and stood on the freeway talking on their cellphones while waiting in a traffic jam.

Obviously I'm not the only one who has made note of the car domination here. There's an excellent blog called Citythinkers (Los Angeles Magazine) where a variety of urban issues are discussed (one recent posting was on road rage in L.A.), is filled with comments on the negative side of living in 'Autopia'. There is actually an organization called FAST (Fixing Angelenos Stuck in Traffic) and an ambitious campaign called moveLA (a plan for subway expansion). They are on it. 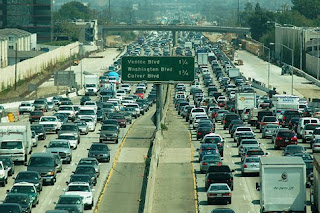 When people talk about L.A., they are really talking about the city of L.A. and the surrounding cities, making up the greater Los Angeles Metropolitan area, where more than 18 million people cohabitate, often in single family dwellings. Some, but not many of those people live and work in the same place, one of the reasons that they need a car. Amenities tend to be segregated (just try to buy a bottle of wine for a dinner party while you are shopping on Robertson Blvd, a street dominated by clothing stores). People just get used to driving everywhere to get everything.

You would think that parking would be an issue but its not. It is in abundance wherever you go. Some would say this is incentive to drive more.

On an excursion from Santa Monica to Echo Park (a neighborhood within the city of Los Angeles), we were given a 10 point navigational instruction list. In truth, they were excellent directions, but almost an hour had passed before we hit point 3. (mainly because we were only going 20km per hour on the freeway). Then our GPS got stuck (yes they do this) causing us to miss a very important turnoff. Panic ensued as we listened to the manly GPS voice recalculating. Maybe we should have brought snacks?

I often complain about Calgary's car culture. The sprawled out lay of the land, the gas guzzling SUVs. Could the same fate await us? Could this be a cautionary tale? Michael Dear's statement in the introduction of Made in California-Art, Image and Identity 1900-2000 published by LACMA (Los Angeles County Museum of Art) says it all – "Watch California. Ready or Not, it is the shape of things to come."

Are you ready, or not? 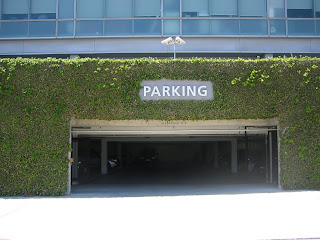 'Get around the city in the quickest way' day 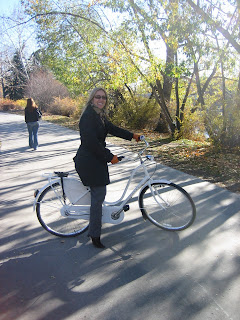 Like Copenhagen's Mikael Colville-Anderson, I prefer to think of the bike as a tool, the quickest way to get around town. In the latest addition of WALRUS magazine, Colville-Anderson writes "Here the bicycle is a vehicle...and I always say we don't have any cyclists in Copenhagen. None of them identify themselves as cyclists. They're just people who are getting around the city in the quickest way."

I like that. The word cyclist to me evokes visions of Lycra shorts and clamped-in bike shoes – a sporting activity for the weekend. I like to think of riding my bike as just a better way to get around Calgary than a car, and without the headache/cost of parking when I arrive at my destination.

Who wants to have to don special clothing and strap a bottle of water around their waist every time they want to go somewhere? Not me.

In fact I think that might be one of the reasons Calgarians don't ride their bikes to work more often. Because they feel they need to dress in a certain way, be athletic cardio-junkies, or swig special protein drinks for breakfast. Perhaps they just don't see themselves that way and therefore can't see themselves riding that bike down the street, let alone all the way to work.

I'm here to tell you that anyone can ride a bike and you don't need anything special or be anything special to do that. So get that word "cyclist" out of your mind and just think of yourself as a person trying to get around the city in the quickest way possible. 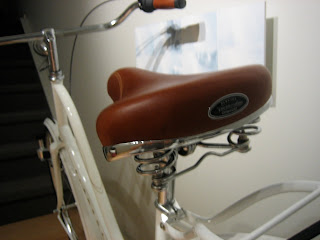 Posted by Maureen Hodgan at 8:23 AM No comments:

What to do when it snows in May 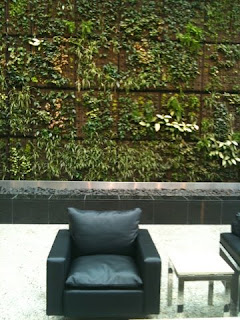 I told myself I wouldn't complain about the weather. This is Calgary. Every year the same thing happens - it snows - way after the time that you've purchased and worn your open toed shoes. Just live with it, or better yet, come up with an idea that will make you forget about it.

And that idea came from someone who intimately knows the +15 level of downtown Calgary - my friend Wendy Lockhart, owner of Madison + PAGE, situated not coincidentally, on the +15 level of 5th Avenue Place. It was the word 'winter' that made her think of it.

"Have you been to the winter garden?"

She wasn't talking about the street scene outside. The winter garden is located on the +15 level of the new Jamieson Place building. Having pointed me in the right direction, off I went to discover the spot that would potentially help me forget about the weather.

It worked. This place is amazing. A hidden gem of an indoor urban garden right smack in the middle of downtown! There were a few others who had also discovered it, and were nestled in a few of the numerous black leather chairs, book (or latte) in hand.

There are a couple of things that stood out immediately. The first,hanging chandelier-like in the center of the space were 3 enormous glass-blown sea-creature-like sculptures by Dale Chihuly. The second, a massive back wall covered in thousands of plants (the information panel said 20,000 plants to be exact). They were arranged in a kind of patchwork pattern of squares. Stunning.

I walked around the rest of the space, taking in the water feature, bamboo plants and carefully placed chairs, enjoying what seemed to be sunshine coming through the skylight and floor to ceiling windows on the far wall. Could it actually be sunny in here while its snowing outside? How can that be? Just an illusion? 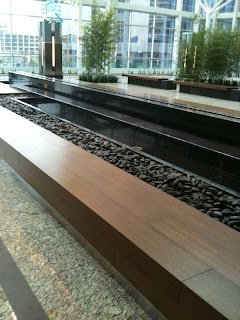 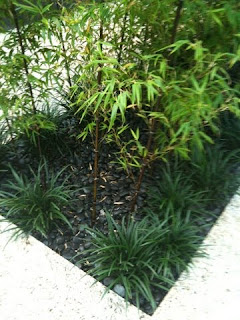